Kerkhoven Family – We Heart Local BC 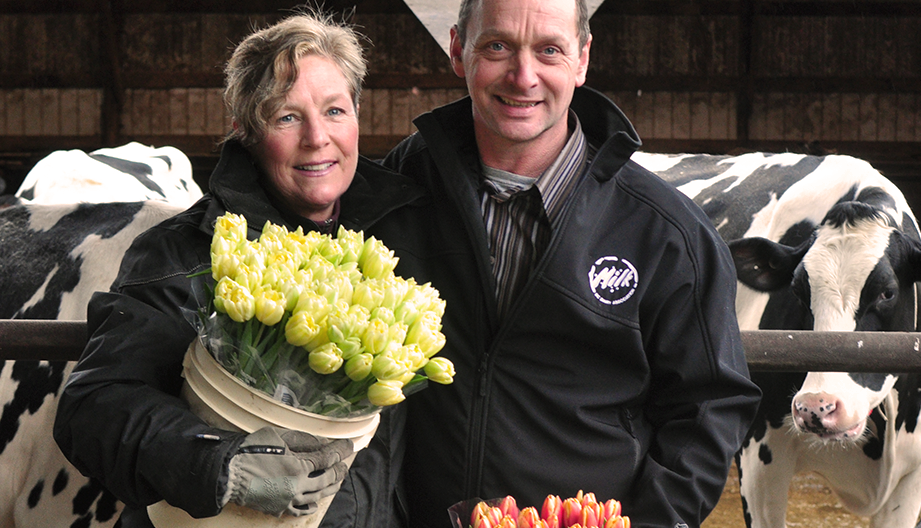 
Fraser Valley dairy producers, the Kerkhoven Family, have been farming in Deroche, BC since 1955. Dairy farming is a 365-day job and one of various responsibilities: tending to the animals at 3am for their first milking and ending the day around 8pm finishing up farm chores including seasonal tasks such as corn planting and hay cutting. John, a 2nd generation dairy farmer, keeps himself busy on the dairy farm but that isn’t all he does, he’s also a flower grower!

When John Kerkhoven completed university in Vancouver, he hopped on a plane and took a year-long trip to Holland. Upon his return to BC in 1988, he was given a piece of his father’s property to start something on his own – anything he wanted. John chose to set up a greenhouse planting tulips, callas, and peonies. John grows tulips in the spring, followed by sun-soaking callas, and pretty peonies in the summer. The Fraser Valley boasts perfect conditions to grow flowers requiring the greenhouse to only be heated 5 to 10 degrees more than the temperature outside, plus its close proximity to the urban market also has its perks.

Ten years later, John and his wife, Darcie, purchased his father’s dairy farm. Having lived and grown up on a dairy farm, it was hard to let it go but an easy choice to make. Dairy farming is demanding enough on its own, but John’s trust and confidence in his employees give him the flexibility to keep his interest piqued at either location during the busy and more demanding season.  From October to April John works primarily in the greenhouse tending to the flowers for planting, harvesting, and supplying his goods to the auction house or mass retailers such as Costco. Between April and October, he’s in the barn with the cows and managing the chores and responsibilities to grow their feed and keeping the farm clean and tidy. Darcie, John’s wife, does the bookkeeping while his daughter, Marlies, works in the barn with the animals in between classes and studying. John’s son, Adrian, is in the Northern Interior, but visits back home are often an extra set of hands on the farm.