An appetite for Canadian cuisine: Anita Stewart keeps it local

“It’s the circle of local life”: Jennifer Schell on wine, cheese and the Okanagan 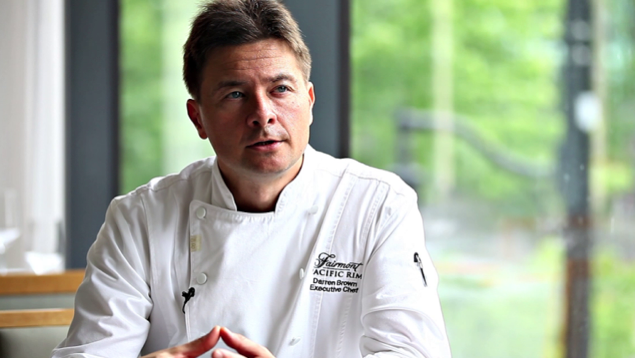 We recently sat down with Chef Darren Brown, Executive Chef at Oru Cuisine located in the iconic Fairmont Pacific Rim. Born and raised in Vancouver, Darren spent his childhood summers on the Sunshine Coast where he learned firsthand about enjoying the local fruits of sea and land. After working in a variety of Vancouver kitchens as a young adult (CinCin, Horizons and Whistler’s Quattro, to name a few) and then travelling the world preparing food for celebrities ranging from James Bond to the Princess of Spain, he decided to return home to raise his family in Vancouver. Today he keeps himself busy as the Executive Chef at Oru and says that his experience both at home and abroad has taught him the priceless value of simplicity—to use the best product at the right time, and to let food speak for itself. (For more on Chef Darren Brown, check out the video we did with Darren here.)

Buy Local Eat Natural: How important is it to you to have relationships with the people who produce your ingredients, and why?

Chef Darren Brown:  Getting to know the growers is one of our primary focuses at Oru because when someone cares deeply about their product, it’s the absolute best platform on which to build a great dish.

One example of this is our experience with the Sawmill Bay Shellfish Company. We’ve worked with the owner, Steven Pocock, right from the time he started out. A few days after we got our first shipment of oysters from Steven, the ones that hadn’t been served yet vanished. We thought they’d been stolen but it turned out that Steven had taken them back. He quickly brought replacements, explaining that he couldn’t have oysters more than two days old in the city because ‘his name and reputation are at stake’. Here’s a guy who cares so much about his oysters that, without any recognition, compensation or credit for it, he’s making sure that all of his product is incredibly fresh all the time!

BLEN: What are some of your favourite locally sourced foods? And where do you go to find them?

CDB:  I’m a fan of the fresh seafood that comes from Organic Oceans. Steve Johansen who heads up Organic Oceans has formed a bit of an unofficial co-op for smaller local fishermen who are too small to sell directly to kitchens themselves. When we buy from Steve we know what boat it came from, who caught it and where and when it was caught. We’re also huge fans of the locally produced tomatoes at Village Farms—they’re bio-sustainable, have great consistency and the flavour is outstanding. We get our delivery pallet full of tomatoes on Thursdays and you know as soon as they’re in the kitchen because you can smell them, lush and still ripening on the vine. Natural Pastures Cheese on the island is the only place in BC doing a handmade Buffalo Mozzarella, made from rare, rich water buffalo milk and the taste is incredible. Their aged farmhouse cheddar is the best I’ve ever tried with sweet caramel undertones to it. Golden Ears Cheese Crafters is a small family run business in the Fraser Valley that has also been putting out some amazing artisanal cheese.  And North Arm Farm in Pemberton is one of our favourite sources for our produce—we’re just constantly restocking up on supplies from them. We normally go directly to the source [the growers] to find the ingredients we work with.

BLEN: You’ve been quoted as saying, “I like to let food speak for itself, but to do that well you need the very best ingredients.” What are some local ingredients you get excited about showcasing at this time of year?

CDB:  Right now some of my favourite ingredients are sunchokes, caviar and sturgeon. We’re also getting an amazing farmed sable fish from Kyuquot Sound that we’re super excited about. Normally you have to freeze sablefish before serving, but due to the nature of their operation we’re able to serve the fish raw without freezing and it has a bite like a high snapper but a crisp texture with a little more fat to it. We do it in our ceviche bar and it comes out really, really nicely.

BLEN: Can you share one of your favourite local recipes with us?